In a day on Syros you can see lost mountains, explore ancient villages, lounge in a funky beach town, and sip pineapple juice as you watch the sunset. And all you need is 15 Euros for a scooter, and a phone to call George. That was who I was currently talking to.


“I pick you and we drive to get scooter. Your hotel?” George said. I trusted this proposition because he’d paid for a signboard in town. I assume human traffickers don’t advertise.


“That car’s blue. That’s a bus. That’s a cat.” Raquel is nothing if not patient.


Finally George pulled up in—as promised—a red car. We piled in and drove off to rent a scooter. Raquel chose a blue one, and named it Fly-trap after what it would turn our mouths into, and we were off, albeit briefly. It seems 15 euros doesn’t exactly cover gasoline. But there’s not much better in life than a full tank of gas and nothing to but explore, so we paid the seven euroes it cost to fill Flytrap’s tank and vowed to discover every nook of the island.

﻿
The island of Syros is beautiful in May. Daisies and lavender bushes fight for the attention of honeybees. Goats and sheep lost in a maze of meter-tall rock walls munch on lush grass already starting to turn yellow. Blocky houses with funky arches and courtyards shaded by grape vines crowd together in the valleys and a whitewashed church trimmed in blue sits on top of almost every hill. It’s breathtaking and wonderful and feels very much alive.
Our first stop was Anos Syros, a town atop a hill built in the 13th century by the Phoenicians. It overlooks the city of Hermopolis, and doted on by the locals. They all insisted that to not go and wander the streets was to not experience Syros.
So we parked Fly-trap near a marble staircase and looked towards the top of the town. A sandy colored church poked out of a mess of houses, laundry lines and gardens. With no clear way to the top, we meandered in. Up and up we climbed, through a labyrinth of courtyards, potted flowers and hidden tavernas. We smelled women cooking, heard children practicing the violin, and saw men painting and repairing mortar, readying the town for summer. We climbed past them all, under tiny arches, up crooked staircases, and over sleeping cats until we arrived at the church at the top of the hill.


We caught our breath, let our grins tire themselves out and started our descent back down.
Wait, did we go this way, or that way?


We emerged from Anos Syros completely disoriented and a good hundred vertical meters below where we had left Flytrap. To take the obvious path would be easily a kilometer of snaking, highly trafficked road, so we braved the labrynth again to try to find our way out. After a painfully long climb up a staircase that meandered through wildflowers and brick ruins, we were back in the medieval hilltop town. Like  and the minotaur, I kept my hand on the right wall, and we found our way out.


Feeling foolishly accomplished, there was nothing left to do but explore the rest of the island.


So on we drove, around blind turns and cliff-hugging bumpy roads until we reached the church of St. Michalis on the far end of the island. There was nothing but a big black rock, fields of flowers and a farm with perhaps two dozen beehives. Our curiosity quenched we headed south to the town of Kini, where we did nothing but swim, nap on the beach, and eat fresh anchovies from the Aegean Sea. We watched the silhouette of a lone fisherman cast his line against the sun set of a perfect day. 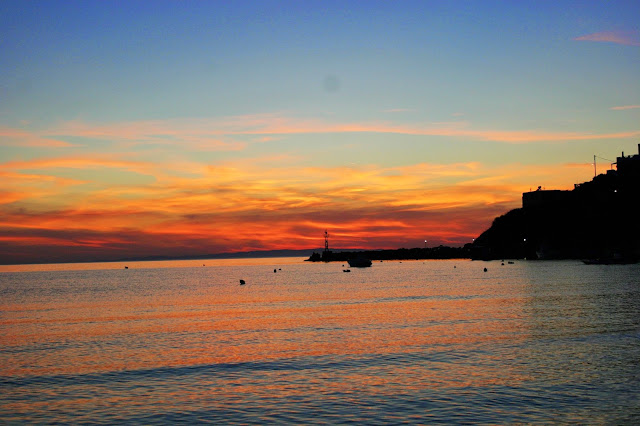 In you enjoyed this post, there's more! Click for the people of Greece or here for the cats of Syros!
Posted by J. Darris Mitchell at 5:44 AM