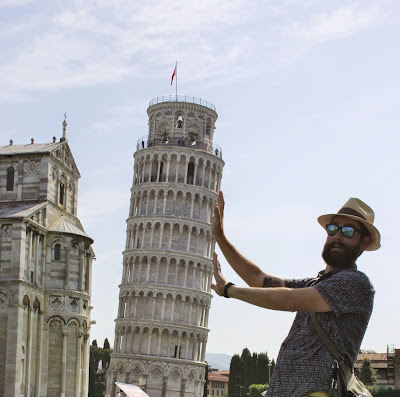 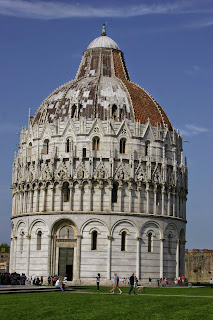 We arrived in Pisa at night and explored the city armed only with a bottle of wine. We found droves of youth buying booze in tiny alcoves labeled ‘cold drinks.’ We found street performers and falafel shops and a square overflowing with people. We found Italian protestors, their words and their cause indecipherable, their music though, was easily understood and compelled even the homeless to dance. There was an energy in the air that was infectious.


There was still energy the next day, but it had morphed into something far stranger. We found the famous monument and its brethren in a grassy field so large it dwarfed the marble structures. The  tower and the church it accompanies seem like children’s toys, dollhouses built of stone long ago in the time of giants. Maybe its just the lean of the tower, but something about Pisa during the day is terribly whimsical, and compels even the most stone-faced of tourists to shuck away any remaining self-respect and try their best to immortalize themselves holding up the tower, kicking it over, or whatever other perspective-defying hijinks have been done there since the photograph was invented. 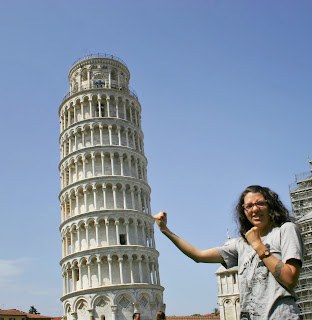 We, of course, tried our hand at this most venerated of tourist pictures, and proceeded to fail miserably. But we still had a great time. I tried to take photos of as many people as possible attempting to hold up the tower in one frame and Raquel searched for Japanese tour groups to parade me through with Kumamon on my back. After a month in Europe, the bear has lost a lot of his charm (A man in Greece asked us, “and this is the best thing to come out of Japan?), yet the Japanese still love him. A Japanese woman who was taking leaning pictures of Pisa, when confronted with the cabbage-loving ball of cuteness could do nothing but gasp, “Kumamon? Kumamon kawaii!” the equivalent of “SpongeBob? I love SpongeBob!” 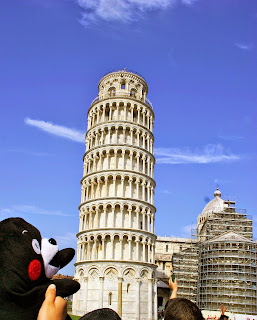 Pictures taken we boarded a train for Florence to make a transfer to Venice. But that transfer never happened. I spent my time on the train scribbling away while Raquel helped every person aboard get off at the right stop except for us. We disembarked only to find we’d gotten off at the second Florence stop, when we should have gotten off at the first.


Our brains melted into puddles of self-loathing and incompetence while we waited in line to see if we could change our tickets. Italilain train engineers are amazing, for when we showed the woman at the counter our now useless tickets she was able to get us on the next train and even refund us a couple euros. 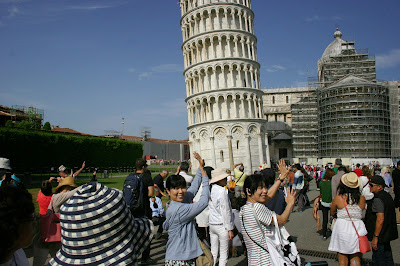 If you liked this story come to Rome or try out Vienna!
Posted by J. Darris Mitchell at 4:00 AM