After the amazing exhaustion that is the Sistine chapel, we still had the rest of an ancient city to explore. We hopped on a train (frighteningly off-schedule and claustrophobic after living in Japan) and headed to the old town. Our first stop was to recharge outside the church of Cappucin with a cappuccino. With this dose of meta-caffeination we were ready to see Rome.


﻿﻿﻿﻿And see it we did. We walked into Basilicas to find catholic masses underway or just other tourists 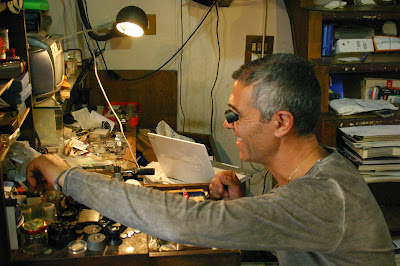 marveling at their splendor. In a toy shop a magician performed a private show in which he transfigured cards back into themselves and severely tested the material limits of a silver chain. In a tiny shop no bigger than bedroom an Italian watchmaker replaced Raquel’s watch’s battery with a smile and in a bookstore behind a cathedral we perused esoteric tomes containing knowledge of everything from astral projection to the origin of the tarot.

﻿
We explored the Pantheon. Its altars for Zeus and Athena long ago replaced with effigies of Jesus and Mary. The sun from the hole in the roof cast an unusually equal light upon the saints and martyrs, lifting them to the status of the pair supposed to be their betters. Catholicism has ﻿
whitewashed much of the world with its version of history, but this was one place where the pagan predecessors could still be felt.

﻿﻿We ate gelato and a crappy overpriced meal and explored The Coliseum. It looks like the progenitor of every arena ever built. It is marvelous, and proves mankind’s obsession with the distraction of fun and games goes back much farther than all but the most diehard sports fans would care to admit.

But the most powerful moment of the day was stepping into an empty cathedral to find a lonely priest practicing on a magnificent pipe organ. It was hauntingly beautiful. After a sitting in the pews for a few minutes it began to overwhelm my atheist sensibilities.
In these hallowed halls, built centuries ago, I could feel Christ suffering, because for the first time in my life, I felt I had suffered if but a fraction of what any other person on this earth has endured. There are things worse than testicular cancer, to be sure, but not in my privileged life. Confronted with the beauty of this place of worship and the music it inspired from this man, I fell to my knees and begged God for health and a family. After surviving the first battle with testicular cancer, nothing else seems as important to me. And to be there, to see Christ’s pain, and what it inspires in people, to hear what it inspired this lonely man to play, brought me to tears and moved me to beg God for mercy.


If you liked this story check out Rome Part I.
Posted by J. Darris Mitchell at 4:01 PM