In Florence, even a simple bridge seems a triumph of the Renaissance. Instead of simply crossing a river, the Medici and the artisans they employed built a structure strong enough to support gold, the shops to house it and the people who flock to buy it.


Don’t worry if you get to Florence without a hotel, we didn’t, and we only had to talk to walk into two hotels before we found a room that after a little bargaining was in our price range. 60 euros a night. Did we get ripped off or get a steal? You tell me.
﻿
Once checked in we queued up to get into the Uffizi art museum. After an hour wait and three hours exploring its hallowed halls, I will admit, the Uffizi is an amazing museum. In particular Raquel and I found a painting by Botticelli of Madonna and Christ so beautiful it eclipsed Botticelli’s own Birth of Venus only a few paintings over. There’s also a quite scandalous sculpture of a woman in ecstasy, a two sided painting of a dwarf in all of his glory and the first female breast ever painted. Even a man easily bored by stuffy old art museums can spend a few hours there.


But my favorite sight to see was the Domo. Pictures certainly speak more than words, but with the Domo even those fall short. It is a massive structure of white, green and red marble that is so big one cannot ever appreciate it in its entirety, because, unlike the structures of Pisa which sprawl languidly on a wide expanse of green grass, the Domo is hemmed in by six story apartment buildings. One cannot ever get far enough away from it, so it always feels like it is constantly on the verge of swallowing up the viewer. I had to move in close, but this is no less mend boggling, for every inch of this massive marble structure is carved. The walls, the pillars, the windows, the doorframes, even the doors themselves are carved into popes and prophets, sigils and spirals, flowers and finery the likes of which I’ve never seen anywhere else in the world. 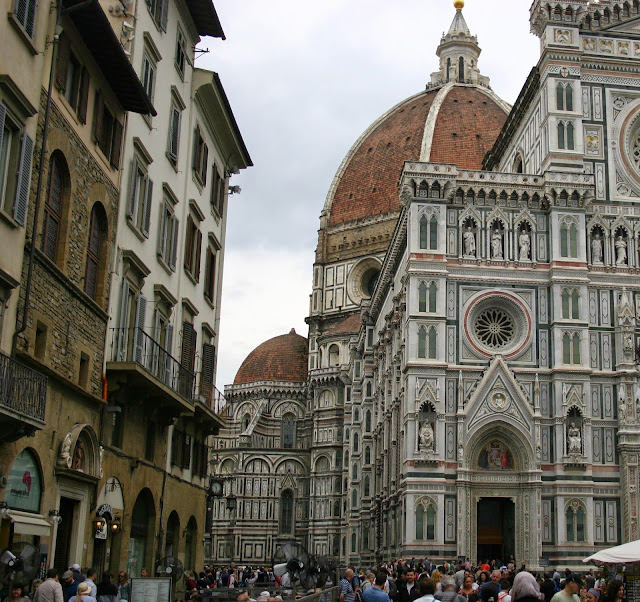 To leave it behind is to lower one’s expectations, but it must be done, for we had other cities to see.


Yet this did not prove to be as easy as we’d hoped. After Florence we spent a day in Pisa but had to stop back in Florence to catch a train to Venice via Milan, but alas we misread our tickets and got off a stop too late. A new ticket (at no cost to us, they must be used to incompetent tourists) and fifteen agonizing minutes later Raquel made the grave mistake of ordering a—gasp—iced coffee!


No sooner did the words leave her mouth than the cashier, an older woman undoubtedly married to the man manning the espresso machine sneered and told her husband in heavily accented English, “she wants an iced… coffee...”


The man could have prepared the milk for my cappuccino with the steam coming out of his ears. For a full minute be banged pots, smashed pans and furiously paced back and forth, stopping only to glare at this less-than-human who’d dared order a coffee at a temperature any less than scalding. Not wanting him to knock the place down or attempt to decapitate my wife with a sugar spoon I quickly changed the order to a frappe instead. He visibly relaxed, and by the time he brought us our drinks, “here is your frappe and a very, very, very, very, very, very, very, very, very, hot cappuccino,” he seemed downright pleasant.


Caffeinated and terrified we made for our train to Venice, happy to escape with our heads, and a train to put them on.
Posted by J. Darris Mitchell at 4:12 PM